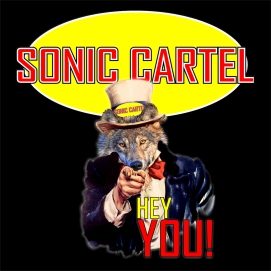 Sonic Cartel are a high-energy Britrock band as honest and unpretentious as your favourite t-shirt and pair of jeans.

“Angular rock and emphatic drums to tattoo the songs deep into the minds and hearts of fans...Sonic Cartel hit it out of the park!” NeuFutur

The band’s songwriting partnership, childhood friends Phil and Steve, wrote their first songs aged 12 and formed their first band with their mates AJ and Paul. Branded t-shirts and big plans notwithstanding, success eluded them until, eventually, adult life took over. Then, in April 2016, in a bar in Croydon, the four decided they had unfinished musical business and Sonic Cartel was (re)born.

“Each style collides perfectly throughout each tune…there is something more to each tune as the meaning leads to more thinking about the world we live in. Sonic Cartel are ones to watch!” Pure M Magazine

“This debut E.P. is a Classic Rock tour de force…powerful gutsy vocals, brilliant song composition and riffs and heavy drums aplenty…if this first offering is to go by they are going to take on the world by storm. A versatile mix of Classic Rock with some Funk and Punk!  I defy you not to be part of the "family" after hearing this awesome set of tunes!” New Music Ear

“When you listen to Sonic Cartel, we want you to feel like you belong to something bigger than the individual – you’re part of a family, you’ve joined the Cartel!”

“Hey You” is Sonic Cartel's first single with the latest/original lineup: It's all gone mad out there! Populism, nationalism, fake news...and all the while, the poor just get poorer while the people in power get there by pandering to the lowest common denominator. So do we all take the easy option for a comfortable life, or do we try and make a meaningful change? "What you gonna do now they're coming for you?"

Photos from the band’s latest photo shoot are available.

All media are invited to attend the band's live dates to review the band’s live performance. There will be opportunities to chat to the band and take photos. Official live shots can also be emailed over after the gig.

The Sonic Cartel E.P. can also be listened to on Spotify.

All Sonic Cartel tracks (mastered) are available to be played on your shows, and can be emailed over.

The band is available for interview, to play live acoustic versions of the tracks, and bring along merchandise for giveaways.