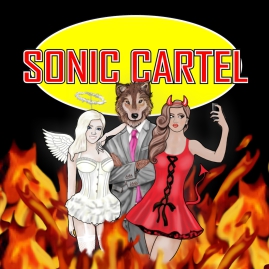 Sonic Cartel are a high-energy Britrock band as honest and unpretentious as your favourite t-shirt and pair of jeans.

“Angular rock and emphatic drums to tattoo the songs deep into the minds and hearts of fans...Sonic Cartel hit it out of the park!” NeuFutur

The band’s songwriting partnership, childhood friends Phil and Steve, wrote their first songs aged 12 and formed their first band with their mates AJ and Paul. Branded t-shirts and big plans notwithstanding, success eluded them until, eventually, adult life took over. Then, in April 2016, in a bar in Croydon, the four decided they had unfinished musical business and Sonic Cartel was (re)born.

“Each style collides perfectly throughout each tune…there is something more to each tune as the meaning leads to more thinking about the world we live in. Sonic Cartel are ones to watch!” Pure M Magazine

“This debut E.P. is a Classic Rock tour de force…powerful gutsy vocals, brilliant song composition and riffs and heavy drums aplenty…if this first offering is to go by they are going to take on the world by storm. A versatile mix of Classic Rock with some Funk and Punk!  I defy you not to be part of the "family" after hearing this awesome set of tunes!” New Music Ear

“When you listen to Sonic Cartel, we want you to feel like you belong to something bigger than the individual – you’re part of a family, you’ve joined the Cartel!”

“Fires” is the first official Sonic Cartel song, penned in April 2016. Everyone knows someone who “loves a drama” and craves negative attention, and feels the need to inject that negativity into their volatile relationships. “Fires” deals with the fallout generated by these people and how the person on the receiving end doesn’t have to put up with it. Autobiographical…?

“Point Of View” talks about the disconnect and lack of trust that exists between the political class and the people who put them in power. Voter apathy and a trail of broken promises has led to a situation where no-one believes the fantasy being sold to them, but don’t feel their voices are loud enough to affect meaningful change. Beautifully illustrated by the band’s “Wolf in politician’s clothing”.

“Consumed” is an allegory for society’s need for instant gratification. Everyone’s an addict: sex, booze, fags, drugs, television, video games, mobile phones…it’s never enough, so we’re all searching for the next high, the next big thing, the great escape from the mundanity of real life. It’s all available, at a price…who’s buying?

4. Tell Me What You Mean

“Tell Me What You Mean” is a father’s concern for the world his young daughter will inherit: famous for being famous, unfettered access to private lives, the constant need to “share” and be “liked” and to be accepted. The, sometimes, dark undertones of this modern world threaten to undermine the hard-fought battles of previous generations. And, drenched in hypocrisy, the father struggles to maintain his own moral standards against a backdrop of scantily-clad selfies.

Photos from the band’s latest photo shoot are available.

“Sonic Cartel – the E.P.” is a selection of songs from the band’s album’s-worth of material that the band will be playing live and promoting throughout 2018.

All media are invited to attend the band's live dates to review the band’s live performance. There will be opportunities to chat to the band and take photos. Official live shots can also be emailed over after the gig.

The E.P. can be listened to, for reviewing, on Spotify.

All tracks from the E.P. (mastered) are available to be played on your shows, and can be emailed over.

The band is available for interview, to play live acoustic versions of the tracks, and bring along merchandise for giveaways.